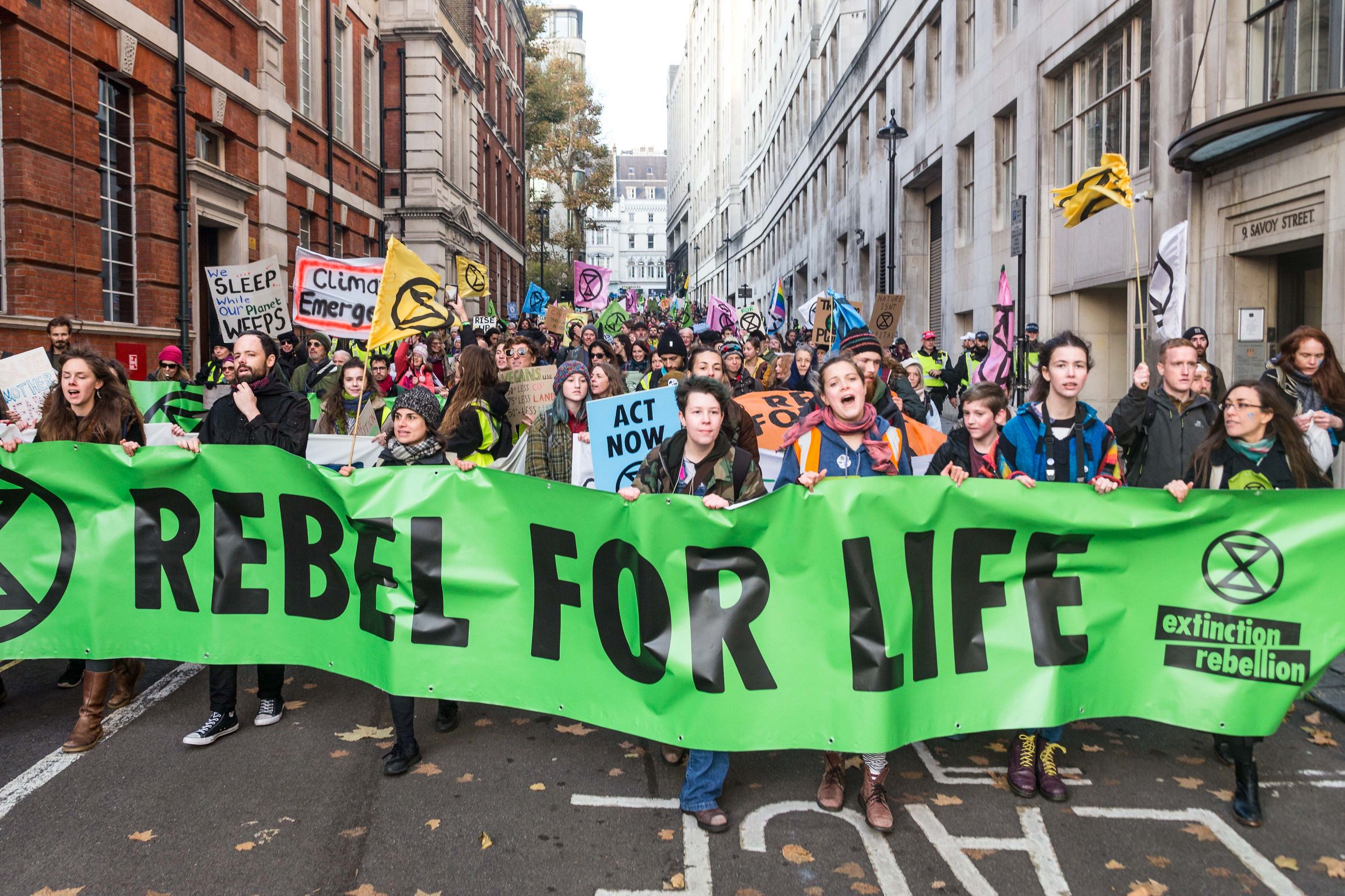 Our leaders have failed us on climate change. It’s time to rebel.

On April 15th we are calling for a full-scale, worldwide mass protest to demand decisive action from governments on climate change and ecological collapse.

Join us as we engage in acts of non-violent civil disobedience against governments in capital cities around the world. This is not a one-off march - we will keep going for as long as we have to, shutting down cities day after day until our demands are met.
Independent XR groups, allies and protestors will take to the streets. A small number of brave Conscientious Protectors, activists from XR affinity groups prepared to lose their liberty for this cause, will commit acts of peaceful civil disobedience to disrupt the business-as-usual which is sending our species on a one-way track to extinction.

Learn more about our demands and values here: www.Rebellion.Earth

Under our current system, we are headed for disaster. Catastrophic climate change will kill millions, cause food collapse, and render many more homeless. Mass extinction of wild species will lead to ecological collapse. Destruction of natural habitats will lead to genocide of indigenous peoples and the loss of our planet’s life support systems.

It’s not too late to change course - a better future is possible. But governments are consistently failing to take the urgent and decisive action that will save us. If the system will not change, then we must change the system. It is our sacred duty to rebel in order to protect our homes, our future, and the future of all life on Earth.

In London's autumn, we planted the seeds of our Rebellion. Thousands of Rebels took to the streets and engaged in non-violent direct action against the UK government for its criminal inaction on what has been described as a "direct existential threat" to humanity. Roads were blocked. Government departments were occupied and spray-chalked. In the biggest act of civil disobedience in decades, over 6,000 Rebels blocked five of London’s Bridges for Rebellion Day on November 17th. And during those two weeks, over 150 Conscientious Protectors were arrested for standing up and taking action to protect our future.

The actions were a wake-up call - disrupting the status quo, shutting down business-as-usual in the city, and showing the government the strength of people power. But from the seeds we planted in November, we need a forest.

Over the winter, our roots grew and spread throughout the UK and overseas. Hundreds of XR groups have organised and taken action in countries and communities throughout the world.

If there isn't one where you live yet, start it. Bring together those who will rise up, and together defend a vision for a better world and a brighter future - one where life matters.

Further details to come in due time - watch this space for updates. You do not need to be arrested to take part. Please share this event with everyone you know, invite all your friends, and spread the word. There is no greater cause on Earth than Earth itself, and the struggle for a true democracy to protect life on this planet, our only home.

This opportunity started on April 15, 2019, 4 a.m. and ended on April 28, 2019, 7 p.m. EDT and happens once. All events occur at an action's local time based on the latest information provided to us. The time listed here has been automatically converted to your device's timezone.

This is a remote action that can be done anywhere as long as you have the necessary time, skills, instructions and resources.

This action has ended, but you can still contact the event organizer to see if there are other ways to help. If you completed it, click the 'completed' button below to get credit and track your impact.

I'm not interested in this activity, don't show this to me again